Leslie And Lolly Make Stuff Up

We spent Saturday morning visiting a new show at the Orlando Repertory Theatre - Leslie And Lolly Make Stuff Up starring Leslie Carrara-Rudolph and Lolly Lardpop. It was amazing and so very funny. Leslie's name might sound familiar to you, because she is the Emmy-nominated voice and puppeteer behind Abby Cadabby on Sesame Street, but this weekend's show was all about Lolly.

Lolly is a candy-obsessed five year old. She has a huge imagination and an even bigger heart. Imagination is important to this show, because, as the title promises, Leslie and Lolly spend 50 minutes with the audience making stuff up. A fully interactive show, the kids are invited onto the stage to participate with singing, dancing, and creative ideas. 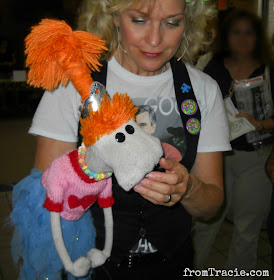 During one of my favorite parts of the show, Leslie brings out a poster board and has one of the children write a number on it. From that number, she draws a character, while singing a song. It starts, "Have you ever drawn a blank while staring at a blank piece of paper? Gone into despair as you stare at the nothing that is there?" and continues with encouragement to draw on your inspiration to allow yourself create something that might just be great. 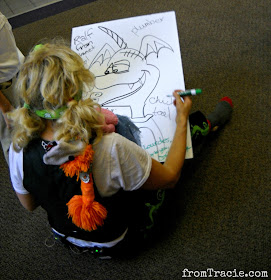 Singing the poster board, and giving a pep talk about
imagination and creativity, after the show.

As a writer, I completely related to the scary feeling of looking at a blank piece of paper (or as is often true in my case, a blank screen), and not knowing exactly where to start. I know that the cure to not having the perfect words is often to get all the imperfect words out of the way, and this was a great reminder for me. I know it is technically a kid song, but it is seriously going to be my new go-to song when I have writer's block.

Back to Leslie and the show, after drawing on the poster board, she lets the audience give ideas for names and other details for her drawing, and a story is born. That is what Leslie and Lolly Make Stuff Up is all about - imagining and believing. It is also full of very silly moments that had everyone laughing. 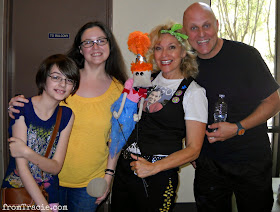 Carrara-Rudolph and Lolly were accompanied on the piano by John B DeHaas during the performance. In between classic Lolly songs like, Meat Cookies, and one of the best two minute recaps of The Wizard of Oz (complete with voices) I've ever heard, other characters puppetted by Leslie came out to play. One of these characters, a lizard named Slax, is created from a dryer hose, a slipper, some gloves, a pair of pants, and a lot of imagination. It was great fun to see Leslie change from herself, into this jazzy, lounge lizard.

One of my favorite puppets was Granny Dot who, at almost 100 years old, is the oldest puppet character I've ever seen. On the way home from the show we were talking about how puppets are so often little kids, which is great, but it was nice to see a puppet who was an older character interacting with the kids from the audience. She even sings a song about embracing her age, and talks positively about the wrinkles on her face, calling them the map of her life. It was a great message of accepting and loving yourself exactly as you are, and Granny Dot even gives out some words of advice born from the wisdom of her years.

Katarina has grown up with Lolly's songs, but there were a lot of new ones in this show. Knowing her affinity for candy (something we most definitely have in common with Lolly), Katrina brought Lolly a rainbow loom cupcake with sprinkles, which Lolly immediately ate. 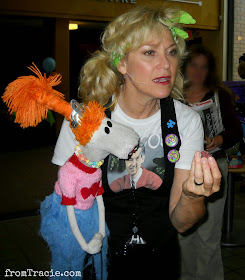 Are you loving Leslie's Mr. Rogers t-shirt as much as I am?
It rocks my face off!

We first met Leslie about six years ago, when Katarina was five years old. 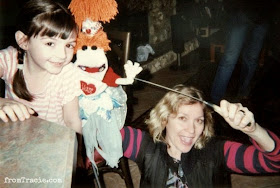 Our special friends Jason and Mary Hunt introduced us, so it was perfect to experience her show with them this weekend, and spend some time with them and Leslie after the show. 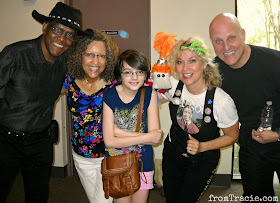 Leslie And Lolly Make Stuff Up is a great show for any age. There will be another performance on Sunday, July 26th at the Orlando Repertory Theatre as part of their 12th birthday celebration. You can find Lolly Lardpop on youtube, twitter, and facebook, where you can follow along with her adventures, and hopefully you can also catch her in a performance near you this year.